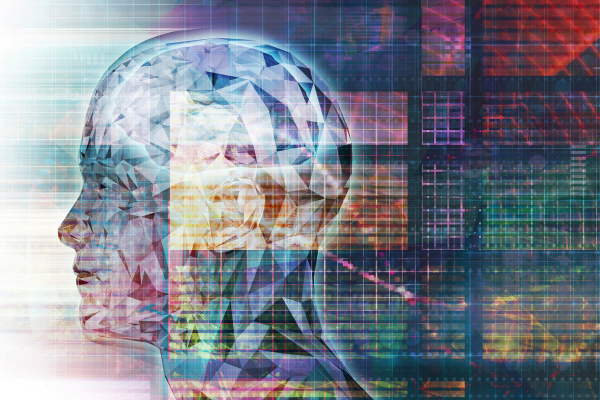 Addiction is a complex disease, making its treatment a fairly complicated task. Substances and certain behaviors can become addictive in the context of particular personal, biological, and cultural variables. To complicate diagnosis and treatment further, people can suffer from overlapping and interacting addictions.

In a recent webinar for Harmony Foundation, Stephen Sbanotto, MS, LPC, CSAT-S, discussed the complex interactions of four types of addiction with four addiction neuropathways. Sbanotto has been a licensed professional counselor for over a decade and is currently the director for sexual addictions and intimacy disorder treatment at Valiant Living in Colorado.

Sbanotto began by giving credit to Patrick Carnes for his contribution to the field of sexual addiction and addiction in general. Most of the information in Sbanotto’s presentation was sourced from Dr. Carnes’s workbooks Facing the Shadows and Recovery Zone.

Sbanotto likened addiction interaction to the astronomical phenomenon of a black hole: “multiple addictions can combine to overwhelm a person with their complexity and power. The phenomenon is so strong that no specific focus is strong enough to escape from it.”

As an example, Sbanotto presented the case study “Jonathan,” a race car mechanic addicted to stress and excitement. During treatment, Jonathan revealed that he had been using various substances, including heroin and cocaine since he was eleven. He was now 48, married with children, and was also compulsively hiring sex workers.

Jonathan did not want to acknowledge that his sexual behaviors were far more compulsive and interacting with his substance use. He believed he only acted out sexually when under the influence of substances. Sbanotto explained that the core of Jonathan’s condition was his addiction to chaos and intensity. He needed a treatment plan that homed in on that central addiction. Jonathan finally had a breakthrough epiphany: fixing one thing did not stop the addiction process because his various addictions were all hooked together.

“Multiple addictions naturally compound, morphing into something powerful and biologically tenacious,” Sbanotto said. “Once the initial neural pathway is laid down, other addictions become overlays, using some of the same circuitry.”

Sbanotto then presented the core graphic of this model: four addiction neuropathways and their interaction with four types of addictions. 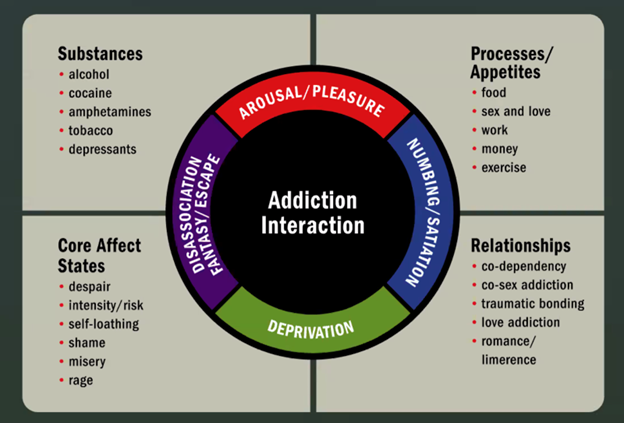 The different motivations tend to interact with specific substances and behaviors. For example, intensity seekers may go for cocaine, amphetamines, and MDMA (ecstasy). Substance use is frequently combined with sexual and high-risk behaviors.

The deprivation pathway often intermingles with the first three. “Anorectic spending, sexual anorexia, and food anorexia share a common control goal: doing without is perceived as the best way to ward off the terror.

In simple terms, “arousal is usually about pain, numbing about anxiety, fantasy and obsession are about shame, and deprivation is about terror,” explained Sbanotto. However, addictions used for any of the neuropathways can (and often do) interact with other neuropathways. For example, the pattern of arousal followed by numbing is quite common while deprivation serves as a kind of “twin” for excessive behavior creating the “binge and purge” phenomenon.

“Addictions more than coexist, they interact, reinforce, become part of one another,” said Sbanotto. “They become packages.”

For addiction treatment to be effective, all of these aspects and interactions need to be explored and addressed in therapy. Harmony Foundation has long utilized a holistic approach to healing addiction and any underlying mental health conditions such as trauma, anxiety, and depression. All staff at Harmony have been trained in trauma-informed care. Realizing that addiction is a biopsychosocial and spiritual disease, Harmony’s treatment program promotes physical, emotional, and spiritual healing, empowering patients to embark upon a lifelong journey of recovery.

If you or a loved one are struggling with alcohol or drug addiction, or you have questions about our programs, call us today at (970) 432-8075 to get the help needed as soon as possible. Our experienced staff is available 24 hours a day, seven days a week