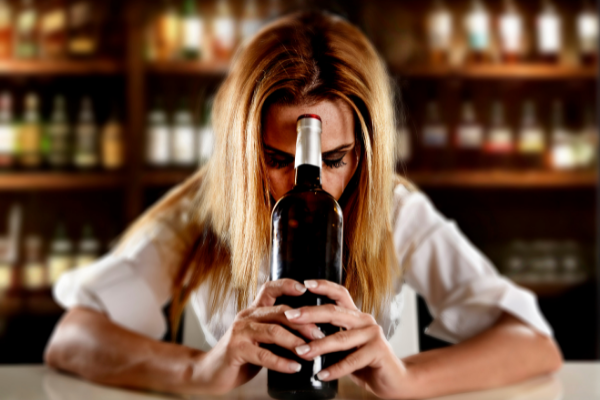 Some 16 million Americans are believed to have alcohol use disorder (AUD). Many of them don’t receive the help they need despite the ongoing addiction crisis that has been plaguing the United States for many years now. An estimated 93,000 people in the US die from alcohol-related causes each year.

A new study by researchers at Washington University School of Medicine in St. Louis involving data from more than 200,000 people with and without AUD found that although the vast majority of those with alcohol use disorder see their doctors regularly for a range of issues, fewer than ten percent get treatment for alcohol misuse.

“Alcohol use disorder is a chronic disease, but compared to other chronic diseases, it’s wildly untreated,” said senior author Laura Jean Bierut, MD and professor of psychiatry. “For example, two-thirds of patients with HIV and 94 percent of patients with diabetes receive treatment, compared with only 6 percent of people with alcohol use disorder.”

“It’s not that these people aren’t in the healthcare system,” said first author Carrie Mintz, MD and assistant professor of psychiatry. “But although they see doctors regularly, the vast majority aren’t getting the help they need.”

Analyzing pre-pandemic data gathered from 2015 through 2019 via the National Survey on Drug Use and Health, the researchers found that about 8 percent of those surveyed met the current criteria for alcohol use disorder listed in the Diagnostic and Statistical Manual of Mental Disorders (DSM-5), the authoritative guide to the diagnosis of mental disorders in the US.

Of the surveyed people who met the DSM-5 criteria, 81 percent had received medical care in a doctor’s office or spent time in a hospital or clinic during the previous year. But only 12 percent reported they had been advised to cut down on their drinking, 5 percent were offered information about treatment, and only 6 percent actually received treatment, some of whom were not referred by their doctors but sought out treatment options by themselves.

The researchers found that although most people with alcohol use disorder had access to healthcare and although 70 percent reported they had been asked about their alcohol use, there was no attempt to follow up with treatment options.

“Some primary care doctors may not feel comfortable telling patients they should cut down on drinking, prescribing medication to help them cut back or referring them to treatment because they don’t specialize in treating alcohol misuse; but the result is that many people who need treatment aren’t getting it,” said Professor Bierut. “We used to see the same thing with smoking, but when physicians became educated about smoking and learned that many of their patients wanted to quit or cut back, doctors began offering more treatment, and more people were able to quit. We think the same thing may be possible with alcohol.”

The study confirms that alcohol misuse was a serious public health issue even before the onset of the COVID pandemic. In January 2020, the National Institute on Alcohol Abuse and Alcoholism (NIAAA) published an analysis that found that “nearly 1 million people died from alcohol-related causes between 1999 and 2017.”

“Alcohol is not a benign substance and there are many ways it can contribute to mortality,” NIAAA Director George Koob wrote a little over a year ago. “The current findings suggest that alcohol-related deaths involving injuries, overdoses, and chronic diseases are increasing across a wide swath of the population. The report is a wake-up call to the growing threat alcohol poses to public health.”

That was before the beginning of the COVID pandemic which is believed to have caused a dramatic rise in drug and alcohol misuse. “We know alcohol use and misuse have increased during the pandemic,” Professor Mintz said in May 2021. “It seems there has been a shift toward heavier drinking. Plus, many doctor’s offices, AA groups, and other support groups were shut down for a period of time, so we would hypothesize that even the relatively small percentage of people in treatment may have declined during the past year.”

The Washington University researchers noted that during the pandemic, alcohol sales in the US increased by 34 percent. Consequently, they expect that as the country emerges from COVID-19 and returns to normal, the number of people with alcohol use disorder will have climbed.

Addiction to alcohol is a serious condition that requires comprehensive treatment. If the AUD is severe and the alcohol misuse has been going on for a long time, withdrawal symptoms—such as delirium tremens—can become life-threatening. Detoxification without qualified medical supervision can lead to seizures and other dangerous conditions.

Harmony Foundation is one of the longest-running and most successful addiction treatment centers in the world. If you or a loved one are struggling with alcohol or drug addiction, or you have questions about our programs, call us today at (866) 686-7867 to get the help needed as soon as possible. Our experienced staff is available 24 hours a day, seven days a week.