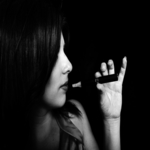 If your program of recovery involves attending 12 Step meetings, then it is highly likely you have seen people puffing on e-cigarettes – devices that vaporize liquid containing nicotine for inhalation. Over the last few years, many cigarette smokers have experimented with e-cigarettes. In some cases people have stopped using traditional tobacco products in favor of ‘vaping;’ in other cases people will use the devices concurrently with tobacco. While there remains to be little conclusive research on e-cigarettes as effective smoking cessation devices, there are a number of health experts that believe they are likely to be less harmful to your health than cigarettes.

Whether or not e-cigs are safer than cigarettes may be a moot point, at least when it comes to people in recovery. New research indicates that many commercial vaping products contain small levels of alcohol, enough alcohol to affect motor skills, CNBC reports. Researchers at Yale University found that about three-quarters of commercial e-cigarette liquids (tested) contained less than 1 percent alcohol. The finding was published in the journal Drug and Alcohol Dependence.

The researchers tested two groups of people, one using an e-cigarette with higher alcohol content and the other group using a device with lower levels, according to the article. While both groups reported not feeling any different, the group that vaporized an e-liquid with higher levels of alcohol showed a worse performance when given psychomotor tests.

“They didn’t actually know they were under the influence of alcohol,” said study co-author Dr. Mehmet Sofuoglu, a professor at the Yale School of Medicine. “It still influenced their performance.”

The findings are especially troubling when you consider that many of the people in recovery who use commercial e-cigarettes may be unsuspectingly exposed to alcohol. It is highly recommended that people working a program of recovery avoid any mind altering substance, regardless of how minute the exposure may be; this goes for certain cough syrups, fermented drinks, some mouthwash brands and even certain foods. Even infinitesimal levels of exposure could have an effect that leads to a relapse.

If you are in recovery and would like to continue using your e-cigarette, it is important that you find nicotine liquids that do not contain alcohol.