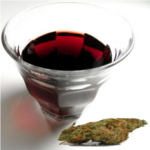 New research suggests that when a person mixes alcohol and pot they show an increased amount of tetrahydrocannabinol (THC) in their blood, TIME reports. THC is the active ingredient in marijuana that is responsible for the euphoria that users experience.

The new study involved 19 people who drank alcohol or a placebo in low doses 10 minutes before they used marijuana in either a low or high dose. The researchers found that when a person drank alcohol, their blood concentration of THC was much higher, compared to when marijuana was smoked on its own, according to the article.

Previous research has shown that when alcohol and marijuana are mixed together, users are far more likely to get into a car accident. Teenagers who mixed the two substances were about 50 to 90 percent more likely to admit to unsafe driving, and they had higher rates of traffic tickets/warnings and car accidents. The new research may explain why that tends to be the case.

Mixing alcohol and marijuana is quite common among teenagers and young adults. In most cases, people are unaware that combining any two mind altering substances increases both intoxication and the risk of injury. While alcohol, and now marijuana in some states, are legal – it does not mean that they are always safe; both can lead to addiction.

If you are a young adult struggling with alcohol and marijuana use, we encourage you to take a look at our Young Adult Recovery Track. Our program focuses on the specific needs of young people looking to find a new way of life through recovery.