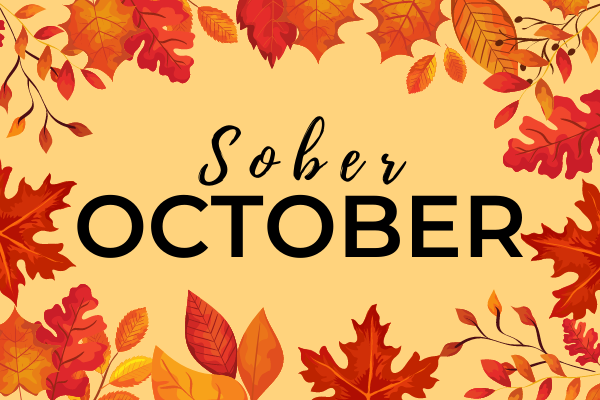 A new movement was taking shape in the year before the COVID-19 pandemic:

health-conscious “sober curious” people in fashionable localities were increasingly asking for non-alcoholic craft beers and cocktails. That trend took a serious hit during the pandemic but many people are nevertheless aware of how unhealthy heavy drinking really is. “Many are abstaining for their health. But it can be harder to commit to swearing off pinot noir if you’re not quitting for a specific reason with a duration in mind. Enter: Sober October,” wrote Molly Longman last year.

Like its New Year’s resolution cousin Dry January, Sober October has participants commit to not drinking any alcohol for a month.

The rules are pretty straightforward. Obviously, you don’t drink any alcohol. But many people also raise money for charities as they abstain—which can fortify their motivation not to give up before the month is up. Others are doing Sober October just for fun and their health, but not for charity. Some people expand the challenge beyond alcohol, giving up other psychoactive substances such as marijuana as well, or are committing to not using social media. Others stick to just alcohol.

Both campaigns may function as a kind of reflection on how important alcohol has become in one’s life. Can you actually go a month without alcohol? And if not, WHY? Dry January and Sober October let people “sample sobriety” without being overwhelmed by any notion of quitting alcohol for good.

Some people are so used to drinking on a daily basis that they may ask “What can I do instead of drinking?” Answer: there are lots of much healthier options. The British newspaper The Guardian offered “17 ways to unwind after a stressful day—without hitting the booze” for last year’s Sober October—among them reading, exercising, and taking up a hobby.

Even a short break from alcohol can make a difference for your well-being. A British study found that “abstaining from booze for a month – sees people regaining control of their drinking, having more energy, better skin and losing weight. They also report drinking less months later.” 80 percent of participants felt more in control of their drinking; 71 percent said they slept better, 58 percent lost weight, and 54 percent had better skin.

A sober period can be an opportunity for people to realize that there is too much focus on drinking alcohol in their lives and that alcohol use is having too much of a negative impact on their relationships and their self-growth.

If alcohol is often taken in larger amounts or over longer periods than was intended and if there have been unsuccessful efforts to cut back, Sober October can become the perfect opportunity to reflect on what that means in a person’s life. Alcohol addiction is a progressive disease that often starts with drinking more than was intended and repeatedly failing to cut back. The real reason for the continued alcohol use is frequently an attempt to self-medicate intense stress and emotional pain.

However, relieving any kind of stress with copious amounts of alcohol is a dangerous proposition. “Excessive alcohol use has immediate effects that increase the risk of many harmful health conditions,” warns the Centers for Disease Control and Prevention (CDC). “Over time, excessive alcohol use can lead to the development of chronic diseases and other serious problems” including alcohol use disorder (AUD).

As we recently reported on this blog, new research showed that consuming alcohol increases the risk of getting more cancers than previously thought. A 2018 study published in the BMJ concluded that “abstinence from alcohol in moderate-heavy drinkers improves insulin resistance, weight, BP, and cancer-related growth factors. These data support an independent association of alcohol consumption with cancer risk and suggest an increased risk of metabolic diseases such as type 2 diabetes and fatty liver disease.”

And unhealthy alcohol use can lead to addiction, of course. A severe alcohol use disorder is a pattern of alcohol misuse involving—among other criteria—being preoccupied with alcohol, continuing to use alcohol even when it results in negative consequences, having to drink more to get the same effect, or experiencing withdrawal symptoms when not drinking.

Recovery from alcohol addiction is more than just giving up drinking, though. It is a comprehensive lifestyle change built on the solid foundation of a purposeful life free from addictive substances and behaviors.

Harmony Foundation is one of the longest-running and most successful addiction treatment centers in the world. Our holistic approach promotes physical, emotional, and spiritual healing, empowering clients to embark upon a lifelong journey of recovery. If you or a loved one are struggling with alcohol or drug addiction, or you have questions about our programs, call us today at (970) 432-8075 to get the help needed as soon as possible.