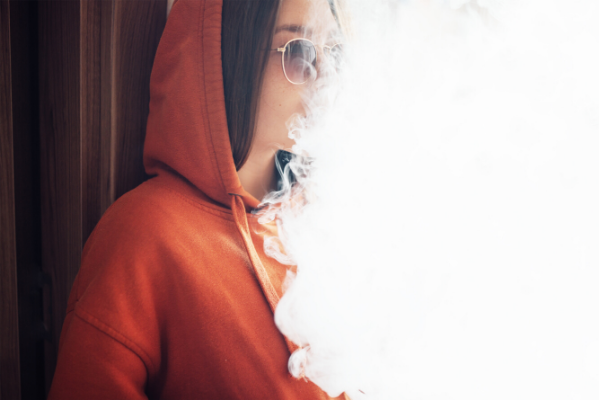 Although e-cigarettes have been around for more than a decade, vaping rates have dramatically increased in recent years, particularly among teens. According to the Child Mind Institute, “e-cigarettes are now the most frequently used tobacco product among adolescents—some 2.1 million middle and high school students were e-cigarette users in 2017—far surpassing traditional combustible cigarettes.”

The Food and Drug Administration announced new steps in September to address the “epidemic of youth e-cigarette use,” issuing “more than 1,300 warning letters and civil money penalty complaints (fines) to retailers who illegally sold JUUL and other e-cigarette products to minors.” The Surgeon General warns that nicotine is harmful to children and young adults. “E-cigarettes typically contain nicotine as well as other chemicals that are known to damage health. For example, users risk exposing their respiratory systems to potentially harmful chemicals in e-cigarettes.”

Vaping products have risen in popularity among teenagers and young adults because they are considered a safer alternative to traditional smoking and provide a clandestine means of using marijuana. In a 2017 state survey, 27 percent of Colorado youths reported using e-cigarette products—the picture is not much different in other states. Vaping is also endemic among young adults in their twenties and thirties.

The popularity of vaping co-evolved with the widespread perception that marijuana use is harmless. In recent months, too many young Americans had to learn the hard way that neither vaping nor cannabis use is without risk, especially when the two are combined.

Colorado is now one of several states investigating severe lung injury associated with vaping. There have been at least nine cases in the Centennial State. Colorado parents Ruby and Tim Johnson told CBS that vaping nearly took their daughter’s life. Piper Johnson was diagnosed with Colorado’s first case of a vaping-related illness. The first-year college student had been vaping for more than two years.

As of October 29, the Centers for Disease Control and Prevention (CDC) reported 1888 vaping-related lung-injury cases in 49 states, the District of Columbia, and one US territory. Thirty-seven deaths have been confirmed in 24 states. Early symptoms of these lung injuries include coughing, shortness of breath, fatigue, chest pains, nausea, vomiting, and diarrhea.

Medically, it’s still unclear exactly what is going on. “Despite the accumulating data on the clinical and imaging features of vaping-associated lung injury, its pathology is poorly understood,” a number of Mayo Clinic specialists wrote in the New England Journal of Medicine in October. They did discover, however, that all of the cases they studied “had a history of vaping, with 71 percent of them having used marijuana or cannabis oils.”

The CDC currently recommends refraining from using e-cigarette, or vaping, products, particularly those containing THC (the psychoactive component of cannabis). Massachusetts Governor Charlie Baker took the drastic step of declaring a public health emergency and banning in-store and online sales of vaping products in the Commonwealth through January 25, 2020. On the same day, California health officials issued an advisory asking residents to immediately refrain from using e-cigarette devices until a statewide investigation into the risks associated with vaping is completed.

The Colorado Department of Public Health and Environment (CDPHE) is investigating all cases reported to them and advises that “the best way to protect yourself against vaping-related illness is to stop vaping.”

“Findings from other states show that most people who got sick used THC-only products or both THC and nicotine products. That is true in Colorado as well, but because the long-term health effects of vaping are unknown and as information on the illness emerges, our best advice is to consider not using vaping products.”

Coloradans who think they may have been sickened by any vaping product should contact their doctor, local public health agency, or poison control at 1-800-222-1222.

Harmony Foundation supports long-term behavioral change. When clients choose our program for recovery from alcohol and drug addiction, they are taught coping skills to help them avoid all addictive substances and embrace a healthy lifestyle. This is why we do not support vaping on campus and provide recovery skills classes that teach healthy choices.

Replacing alcohol or opioid misuse with increased nicotine intake is not a good idea. True recovery goes beyond abstinence from illicit drugs and alcohol. The goal of addiction treatment at Harmony is a comprehensive body-mind-spirit reset. The cessation of substance misuse is only one aspect of that reset.